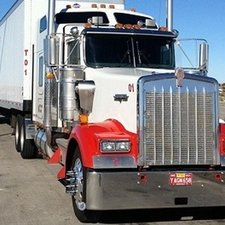 1) The Check Engine light is coming on as we pull a hill or riding the Jake down hill. It turns off as soon as we completely let out foot off the throttle. Then will come back on after a few minutes.

2) The engine fan is turning on at 180-190 degrees and is staying on for several minutes even after the temp is at a normal or even below.

Our fuel mileage has dropped nearly 1.75 MPG! Any suggestions or is it time to find a cliff and push it off?

Thanks in advance Friends...

I wish I could help with the check engine light but that could be caused by any number of things. how ever I may be able to help shed some light on the engine fan issue. I have a C-15 that the fan will come on right when I am gaining speed to get on the hiway after I have stopped. I have also had numerous problems with the a/c this year. but to make a long story short. the fan comes on and runs for about 2 -3 min and then shuts off. What is causing this problem deals with the a/c system and over pressure sensor for the a/c system itself. if you run the a/c system a lot your system could be a little low and causing an over pressure, the fan will come on until the pressure has disapated and will then shut off. it has nothing to due with the temp of the engine. this could be the problem with your truck. the other thing that it might be is the air switch on the firewall that controls the fan could be going bad causing the fan to kick on prematurely. these are the two avenues I would check first and both are farely inexpensive to fix. I hope this info helps

What's the code you get? It could be low coolant or the coolant sensor not reading correctly on hills. Before the next hill unplug the coolant sensor and jump the plug with a paper clip or wire (engine off of course) - if you don't get a cel then it's probably the sensor. Before doing that check the coolant level though ;)

The low coolant sensor would shut truck down, you would not get a cel from that. Check your historic codes and see what it is.

I would suggest having the whole truck checked over. First, pull your codes (they'll appear on the odometer display if you go into DIAGNOSTICS mode). Usually problems like this are indicated by code ECU 128 which is a general fault code for coolant sensor, injector, EGR or temperature sensor issues.

I would take it to a DETROIT shop and have them hook a laptop up to it so they can find where the code is coming from. If they can't find the cause after a try or two, throw the truck off a cliff and buy a pre-emission model.

This is a known issue. The coolant sensors on those Columbias were known to malfunction, though they didn't always shut down the engine. With the fan kicking on at a low temperature, it is possible that a Barometric Pressure (MAP) sensor could also be causing the issue. I would suspect the latter, especially since it's happening when you gain or lose altitude via a hill climb or descent. There are two of them in the air conditioning circuit and there is a third one on the intake manifold itself. CAT engines have a similar set up.

If you run the air conditioner a lot, have the Freon level checked and make sure your air conditioning system is not leaking when you take it in for service.

Checking the codes will certainly help, but often, sensors would only give the code ECU 128 (which is a general fault code) on that model of Columbia, making the issue very hard to pinpoint.

I changed the Oil Temperature Sensor one time with the same problem in my Freightliner Century Class 2005. The Oil temp Sensor is located behind the Oil Filters. Its a little difficult to get to it.

We Are having the same issue with check engine light coming on when gas is excelled. Then off as soon as you release gas pedal.

. no fan problems. We bypassed the coolant and still has the same problem. Sure wish someone could help answer this.. computers were hooked to it..but without the check engine light on, they said it would throw no codes..

I have the same problem no codes on the dash but check engine light comes on when accelerating goes off when I release de throttle and also comes when I turn on the jakes and light goes off immediately after turning them off, note! I have good power, fuel mileage has not drop! Everything seems to work fine except for the check engine light, any comments?